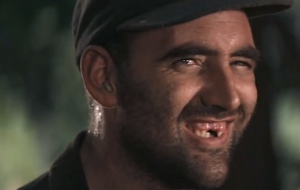 A long ass time ago. 1am, somewhere in Missouri…

Alcohol running wild through my blood and rubber spinning too fast on asphalt, we flew down the winding country road…

A friend I’ll call Scar—an ex-military guy who was into self-mutilation—rode shotgun, while Wolfman’s cousin hunkered in the back, a revolver tucked under his belt.

I called him Wolfman not because he was a scruffy, tobacco-chewing, long-haired, dope-smoking, hillbilly—which he was—but because he was obsessed with wolves—breeding wolves, selling wolves, raising wolves…the whole deal. He even kept fifteen of the damn things as pets. And I’m talking about REAL wolves, like the kind you’d find way up in the mountains…big scary-looking animals.

Now, my partner, Jim, swore up and down that Wolfman was a great guy. “Salt of the earth” he called him.

I wasn’t so sure…

The first time I’d met Wolfman at his place out in the sticks, I knew something was off…

Jim had run off on an errand, leaving me alone with the crazy son of a bitch.

Spitting tobacco juice into a Budweiser can he pulled out this gigantic 44-caliber handgun and started waving it around as he spoke.

I could tell he either thought I was a narc, or planned on killing me for the forty thousand dollars I was holding. 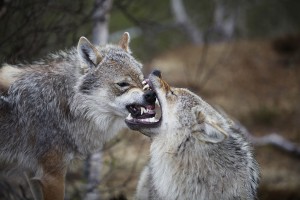 It was just me and my money…and Wolfman, his gun, and his wolves.

Jim should’ve been back long before and I wondered if he was in the trunk of a car somewhere and if one of Wolfman’s cronies was digging a couple of shallow graves for us.

Pictures ran through my mind of Jim being torn to shreds by alligators kept around for such situations.

Finally, Jim came back and the deal fell through. I was just happy to be done with it. I wanted to be as far away from Wolfman as possible. I told Jim about how I thought he was setting us up to rob us, but Jim said, “That guy? No way, man, he’s salt-of-the-earth.”

Salt of the earth my ass…

… Wolfman was a backwoods outlaw looking to getting his hands on our cash by whatever means necessary…I could feel it.

After driving back to Illinois, where we lived, Jim practically begged me to set up another deal with the guy, I stupidly agreed, but told him I wanted nothing to do with that crazy fucker. “Scar can deal with him,” I said.

So here’s what happened….

Scar headed down to Missouri with $37,000 of our money, and goes with Wolfman to pick up the weed. On the way, the two stopped at the store to grab some Ziploc bags.

As they’re walking down the aisle with the Ziplocs, Wolfman said he needed to take a leak and steps off towards the restroom.

After Scar pays for the bags, he heads out to the parking lot and Wolfman is nowhere to be seen. His car…gone. Our $37,000, which Scar failed to take out of the car when they went into the store…gone.

Scar called me and I was furious…

I immediately rented the biggest U-Haul moving truck I could get my hands on, drove straight through the night from Illinois to Missouri, and came blazing into town full-speed like fucking Mad Max in the Road Warrior. Roaring down Wolfman’s street, I crashed the truck through his gate, jumped out, and pounded on his door. 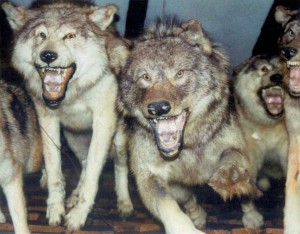 First, I released all of his wolves…don’t worry, this was way out in the sticks, it’s not like I released them in Central Park or at Hollywood and Vine or anything.

I then began packing all his belongings into the truck.

Wolfman’s cousin came over, pistol in hand, trying to stop us from taking all Wolfman’s stuff. But no matter what he said, one way or the other, I was gonna flush out Wolfman.

I tossed everything he owned into the truck…

I took his furniture, electronics, everything. I did let him keep his stuffed raccoons, Confederate flag, and frog gigging poles though… I had no use for that shit. But anything I could hawk, I took.

And then for four days we scoured the earth for the guy.

Scar thought I was crazy, but I let the cousin join us on the hunt…

I knew we could dig information out of him as well as send mis-information through him back to Wolfman.

So there we were—me driving, Scar riding shotgun, and the cousin in the back—doing north of seventy miles per hour down this narrow country road that twisted like a rattlesnake. This was before I’d gone to race car driving school and taken counter-terrorism driving classes, and with all the alcohol running through me I was being just plain stupid… 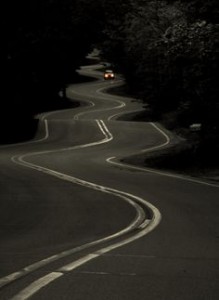 Scar yelled at me to slow down…

I turned and told him not to worry about it, that we were good.

However, I should’ve listened, because the moment I turned to look at him, we hit the apex of a curve and flew off the asphalt…

… We skidded over gravel, shooting straight into the treeline.

… We slammed head-on into an oak tree. We hit so hard that the Isuzu we were in bounced off the tree and spun 180 degrees.

With no airbags to soften the blow, my shoulder and ribs felt like Mark Mcgwire had taken a baseball bat to ‘em.

Blood oozing from his ears, Scar was out cold. I was sure he was a goner.

I shook him until he finally came to. I then grabbed twenty-grand I had in the car’s secret hiding spot and started walking toward the road, but my brain was so turned-around I was actually walking deeper into the woods.

Scar wanted to call the police, but I told him hell no, that since I’d been drinking I’d get arrested for a DUI. I wasn’t all that drunk but I knew I was past the legal limit.

I toted the money back to the motel room we were staying in and called it a night, figuring we could deal with the Isuzu in the morning.

Scar asked me what I was planning to tell the cops. I told him I’d just say that hitting the tree disoriented me, and the only thing I could think to do was to go back to the room and get some rest.

First thing in the morning, a loud pounding woke me with a helluva start… 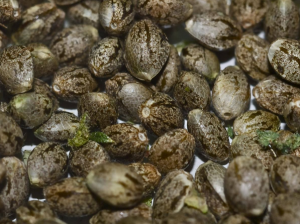 I hopped out of bed and opened the door. A local sheriff and a game warden were there to arrest me.

They’d found a bag of seeds I’d snatched from Wolfman and stashed in the Isuzu under the carpet beneath the center the counsel.

The tow truck driver—who was in tight with the local sheriffs and did a lot of towing for them—had searched the vehicle, found the seeds, and reported them.

I told the officer that the vehicle had sat in the woods all night with its windows down and anyone could have stuck those seeds in there.

He didn’t buy it, so off in handcuffs I went.

First thing I did was find out who the best lawyer in town was, hire him, and for $600 the case was dropped based on the fact that the car had been left unattended overnight and anyone could have planted those seeds.

I asked the tow truck driver why couldn’t he have just called me? I told him I would’ve happily come to his lot to pick up the seeds.

He said that since the vehicle contained illegal goods, it was his duty to notify the sheriff. I told him what he did wasn’t cool, and that he was a piece of shit who wrecked peoples’ lives just so he could rake in a towing bill.

The moral of the story is, don’t be stupid…

It was stupid of me to drive so fast on such a winding road with seeds in the car and alcohol in my blood—I shouldn’t have been driving at all.

The other big lesson is: listen to your gut. The moment I got a bad feeling about Wolfman we should’ve never done business with him again.

Now, I realize “don’t be stupid” and “listen to your gut” are both things you already know. But even the best of us can use a reminder from time to time.

As soon as my book, Marijuana Don, hits the shelves, you’ll be able to read a lot more stories like this one, including what happened to Wolfman and some crazy shit that went down with Scar, shortly after the Wolfman incident, that threw my life into the eye of a tornado.

In the meantime, head on over to this blog post it’s loaded with all kinds of stories from 32 years in the trenches as a pot grower…

… Millions of pot plants, hundreds of millions of dollars, counter-surveillance techniques, a shakedown by a violent biker gang, a plane crash, a crazy and vengeful ex-girlfriend, giant busts, a manhunt by the DEA and U.S. Marshals, a kidnapping, life on the lam under seven different identities, over 50 firsts in the world of marijuana growing, and a bizarre near death experience—it’s all in there.

Read it here: What Big Mike Won’t Tell You About Advanced Nutrients

P.S. I’d love to hear your comments below