How I Harvested So Many Guerrilla Grows Without Getting Caught 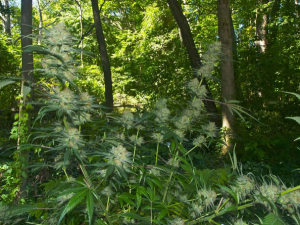 The other day I was kicking back at my new home in Los Angeles, thinking about old times.

I thought about my mom and dad and my crush on Ruth Prince in the 5th grade. Wavy hair, button nose, and a giggle to die for, that girl sure put a spell on me. I’d sit next to her on the bus hoping to get her attention.

One day the bus driver pulled me aside and said, “She doesn’t like you.”

Next, I thought about working the carnivals with my father. He owned a film processing business and would set up a booth at the carnivals to rake in leads. To get me to come with him, he’d bribe me with the promise of ice cream, a strategy that worked like charm. He’d also toss me a dollar every few hours, which I’d use to play games and win prizes, like toys and stuffed animals.

Buck in my hand and ice cream dripping down my chin, I was happy to be his wingman.

I remember sitting on the john at the carnival one time, going number two and thumbing through an issue of Field & Stream. I must’ve been about thirteen. Suddenly the stall door flew open and this old guy slithered in and, with a trembling hand, grabbed for my privates. I slapped his paw away, kicked him as hard as I could and then kicked the stall door closed. 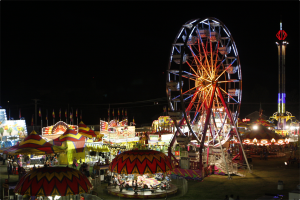 Enraged and terrified, I yanked my pants up, ran outside, seized a “Walking Tall” stick—a big two-by-four I found laying on the ground—and took to hunting him down. All I could remember of him were his shoes. I ran around the carnival like a rabid vigilante, looking at everyone’s shoes, intent on bashing the guy’s brains in. He’s lucky I never found him.

Next, I thought about my days growing in the Midwest before relocating to Canada and going big time. Back in Illinois in the early nineties I typically ran seven or eight grow houses along with six to eight outdoor grows, each with fifty to three hundred plants.

A lot of growers ask me about how I pulled off all those big outdoor harvests without getting caught.

Here’s how I did it…

Now, each season I grew one sacrificial crop, which I’d pull two or three weeks before its peak to bankroll the harvest season. Even though I lost bud weight and the product was a bit premature, meaning I couldn’t get top dollar for it, I’d turn it around and use the proceeds to rent farmhouses for drying and trimming and pay the workers who’d help harvest the rest of the fields 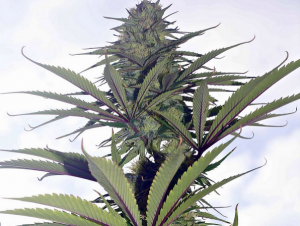 Workers typically earned on the low end at first but their pay grade would rise as they proved themselves. So a guy who came into the field to bag or cut, might only earn a grand on the first run or two, but as he became more experienced he could earn three grand a night.

After harvesting the sacrificial field, I’d lay out a sequence of which gardens we’d harvest next. And then, one after the other, we’d yank those suckers in the dead of night.

Now, harvesting was always stressful. Did law enforcement know about the garden? Were they staking it out? Would someone see us entering a field and call the sheriffs? Would we get pulled over driving off with the plants? Would we show up only to find that thieves or cops had swiped the crop?

And things did go south from time to time…

Sometimes I’d lose a crop that had been there just a few days before, but I couldn’t get to it because we were harvesting other sites, and by the time we finally got to it, it’d be gone.

I once lost a 300 pound field because I missed it by a few days. Almost a million dollars worth of weed was sitting there at the beginning of the week and by the end of the week it was gone.

And one time the cops even surrounded us in one of the gardens. You can read that story here.

Now, for each harvest I ran spotters. This upped our chances of success and calmed my nerves a little, since I knew I’d done everything in my power to make sure we’d make off with the booty without getting caught. Still, every time we pulled a field my heart would kick hard at my sternum. 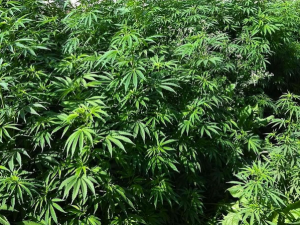 The crew would meet me in the middle of the night at a location where I’d be waiting in a rental truck—rented under a fake name of course. Up until this point, only two or three of us would’ve seen the patch before or had a clue where it was.

One of the spotters would lead our little convoy in a pick-up truck, I’d follow in the rental truck with my partner, and behind us a four-wheel drive ferried the harvest crew—usually four or five guys. The second spotter would trail behind the four-wheel drive.

Once our convoy pulled onto the strip of road where the entrance to the field sat, the tail-car would hang back and pull alongside the road. The lead car would then drive ahead, make sure no one was coming from his end, and park. This way we secured the entire section of road so I could drive into the bush—usually farmland, like a cornfield—without being seen. These were small country roads that typically didn’t serve much traffic late at night, but the buffer created by the two cars was a necessity just in case someone came by.

Once we were clear, I’d throw on my night vision goggles, shut off the headlights, kill the brake and backup lights with custom switches I’d had installed under the dash, and then cut into the corn field at an oblique angle, so no one could tell our vehicles had gone into the corn. The four-wheel would then cut its lights and follow behind me.

(Note: We were always real careful not to mess up the corn. One time we did though, took out about an acre. Figuring it was worth about five grand to the farmer, I slipped an envelope with ten thousand dollars cash into his mailbox.)

If anything looked suspicious while we were in the field, the lookouts would alert me via walkie talkie. If something were to go do down—like the cops rushing in—we’d abandoned the moving truck and the four-wheel drive would get us out of there quick. 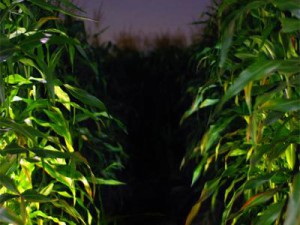 Making our way to the crop, I’d navigate the moving truck through the corn and get us as close to the patch as possible before stopping. The patch was usually in a swamp past the cornfield. You can read about how I found the best spots to plant HERE.

With a near-field radio frequency demodulator, walkie talkie, and scanner tuned in the local police frequency, all attached to my hip, I’d jump out with the crew—all of us wearing disposable gloves—and we’d tote tarps, ropes, and these Japanese knives that could cut through anything, down where the weed was. Miners helmets with lights sat atop our heads, the lights covered with red lenses so we couldn’t be seen off in the distance, but we could still make out what was in front of us as we worked.

I had the entire system down to a science and we were extremely organized. We could harvest a hundred plants in thirty to forty minutes. The cutters, baggers, and carriers, all worked together like machine. The cutters would hack down the plants. The baggers would roll the plants into the blue tarps like burritos and tie the tarps tight with rope. And the carriers, usually with the help of the baggers, would huff the giant blue burritos back to the rental truck, often hefting as many as twenty tarps stuffed with fresh-picked bud, filling half the truck. Each burrito took three the four guys to carry.

Once the truck was full I’d spray a can of ozone back there to neutralize the smell. It wouldn’t even come close to getting rid of all of it, but it helped.

With the two spotters watching the road, the four-wheel drive would exit the field first and confirm the road was secure. Then I’d slip in behind him in the rental truck and one of the spotter trucks would fall in behind me. The other spotter would swoop in, pick up the rest of the workers, and catch up and follow the rest of the caravan. 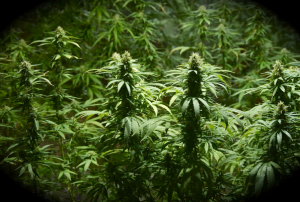 If a cop got behind us, the plan was for the vehicle in the rear to either slam his brakes on so the cop would hit him, or do something to get pulled over.

As soon as we’d arrive at the drying location—usually a barn I’d rented—we’d immediately open the tarps and hang the plants from 1/4-inch nylon ropes. Dehumidifiers sucked out moisture and huge fans moved air so the plants wouldn’t get moldy.

Once the plants were dry enough to trim, we’d lay it out on giant screens for the trimmers.

Now, under a fake name, I’d rented a couple of large U-Haul trucks and tossed a bunch of bean bags in back.

My partner would tell the trimmers—all friends of his—to sit by the phone and wait for a call. Using a burner phone, he’d then call and let ‘em know them where he’d pick ‘em up the next day. At 10:00 am sharp he’d arrive at the location and the trimmers would hop into the back of the U-Haul and chill out on the bean bags on the way to the barn.

Once he pulled the truck into a barn, we’d shut the barn door and slide open the roller door on the back of the truck. The trimmers would jump out, plop down onto chairs we had waiting for them lined up in front of work benches, and get busy trimming, without the slightest clue where they were.

He’d then head out to pick up the next crew. I got a kick out of seeing the trucks pull in. We ran two trucks at a time. I’d pick up one group of trimmers from one parking lot while my partner picked up another group from another parking lot. And the entire time new loads of freshly plucked plants were coming in. We’d have six to eight fields worth of weed moving in and out of the farmhouse over the period of a week or two. 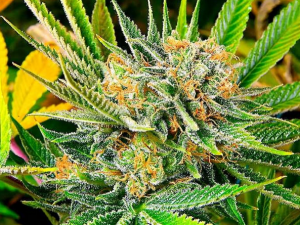 Once the weed was trimmed, we’d toss individual pounds into food saver bags, suck the moisture out with a machine, and then bag them a second and third time.

Now it was time to call my buyers. “Hey, come out and see me,” I’d say. “I have 50 tickets for you.” Tickets meant pounds. I’d meet the buyer, give him the weed and he’d give me the cash.

I’d then pay off any workers who hadn’t already been paid upfront from the sacrificial field money, give my partners their cut, and toss most of my personal profits into a safe deposit box.

I hope you enjoyed this post, and if you’d like to read more like it, check out this one Eljay wrote about my life as a grower. It’s a wild ride, that’s for sure: You can read it here.

The Cops Surrounded My Garden And I…
← A Gift For You From My Years On The Lam
D’oh! Hundreds of Pounds of Weed Drying and The Landlord Wanted to Show The House →